A Long Day at the Sewing Machine 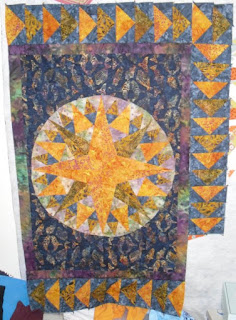 I work on sewing projects almost nonstop today. To show for it, the mariner's compass has gained one and a half borders. (I used needle turn applique to attach the medallion to the background last night.) With the geese border on it measures about 54" x 42" I used the speed piecing (method "B") found on this site to make the geese and it worked like a charm. I will need to get over to the quilt store for more of the blue fabric before I can finish that border, hopefully on Sunday. In the meanwhile I can work on making a pattern and paper piecing the final border's cornerstones, which are going to be quarter circle compasses with lots of little points. 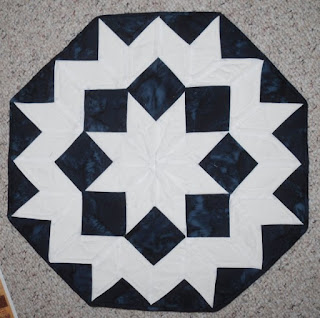 I also made this little snowflake wall hanging for Christmas. I made one of these last year for a swap but don't have any pictures of that one. The one last year took a lot longer, but in the meanwhile I've finally mastered a Y-seam so this one was quick. I used my grandmother's carpenter's star quilt for a pattern, literally laying a ruler over her pieces and adding on seam allowance. I like this style of carpenter's star better than the one I usually see where not all of the squares around the inner star are the same size. I think that one is more common because it can be made with no Y-seams? Anyway, here's a close up of the snow-y quilting on the center star. This thing's going in the wash first thing tomorrow to get that nice dryer crinkle. 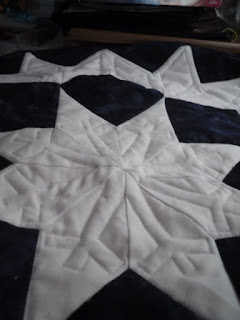