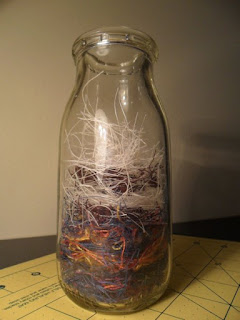 I love seeing the evidence of hard work pile up like this, little by little. Each new project forms a layer as all the trimmings go into the jar.
Posted by Kat at 5:30 AM No comments: 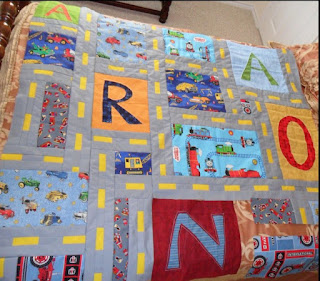 It's been a while since I got a chance to sit down at the sewing machine, but today I got the time to sew most of this top together. I've been collecting transportation themed fabrics for this little boy quilt for a few weeks. I made the "road" sashing by cutting wide strips of grey and yellow and piecing them together, then slicing down the strips to make the narrow alternating center stripe, and sandwiching that in more grey. 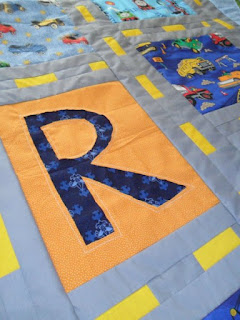 The reverse applique letters spell out his name. The quilt will measure 60" square when finished. I'm stuck, for the moment, until I can run to town for more grey fabric to finish the sashing.

I hope it's cooler wherever you are than I am here!
Posted by Kat at 7:00 AM No comments:

Email ThisBlogThis!Share to TwitterShare to FacebookShare to Pinterest
Labels: roads

Summer of the UFO continues 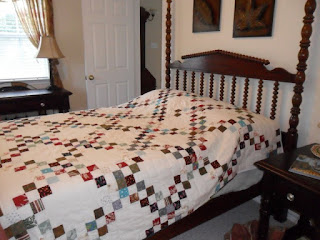 The double irish chain quilt has been lying around for a while mostly quilted, just lacking the bindings. Somewhere along the way it became a dog quilt, or an inbetween-the-layers sort of quilt. It has more issues than I care to list, but it still works perfectly well to keep you warm :)

I have been practicing freemotion quilting in the open squares when the mood strikes me, but I decided I can do that with the binding on. So, I sewed together all the bits of binding I had leftover from previous projects - everything from bold checkerboards to subdued dark solids - put the binding on and washed it. It's a nice size quilt and I like the colors; it's so nice to finally have it done!

The plume top is layered and in the process of quilting so with any luck I'll have another one finished soon!
Posted by Kat at 9:33 PM No comments: 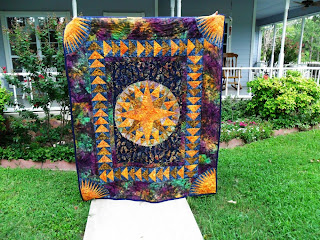 The Mariner's Compass quilt, henceforth known as "Anacortes," is finally finished and all krinkly warm from the dryer! This is by far the heaviest quilting I have ever done and also the most custom quilting. It took several days, spread out over a couple of weeks, to finish. There was also quite a bit of trial-stitching and unpicking in this quilt, which is something new to me. I hate to admit it, but it's true: I'm usually too lazy to undo something once I've done it. My motto is: "I'll do it better the next time." 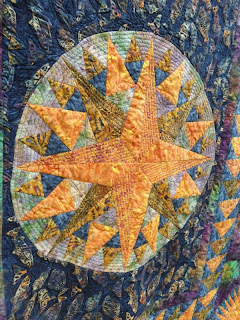 I quilted the compass medallion by stitching in the ditch around most of the elements and then quilting lines in the "shadowed" points of the compass, using my presser foot edge as a guide. I quilted curving lines in the outside triangle to try to give it more depth and I really like the way that came out. 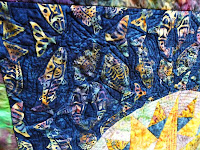 The real star of this quilt is this beautiful fabric with a native fish motif that I picked up last summer when I was on my sailing trip in Anacortes, WA. I basically made this quilt to showcase that fabric, pulling all the rich colors from the fish to make my fabric choices. The pic above and the very top picture on this page have been color tweaked to show a more true representation of the colors in the quilt, the rest of the pictures really don't do the depth of the colors justice. They are unbelievably saturated. I quilted the fish fabric using black thread around the fish, filling in any large gaps which echo quilting, so that the fish would pop once it was washed. 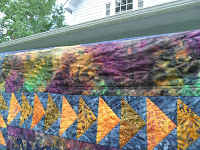 The geese got a curved line across the bottom and stitch in the ditch around the point and I used a chalk pencil to mark big waves in the outer border. 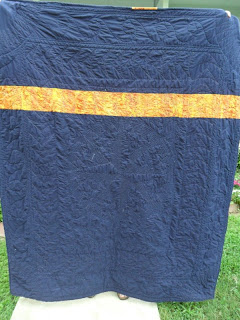 That single piece of yellow in the binding on top was a happy accident. After I trimmed the backing down to size I used the scraps to turn into binding and that piece was from where the pieced yellow stripe runs across the backing. I decided to leave it in on impulse and I'm glad I did, I really like the look. 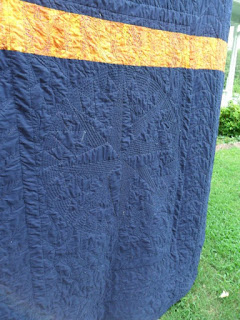 The quilting is easier to see from the back, especially since my bobbin thread was a bit too light. I like it, though. It almost makes the quilt reversible. 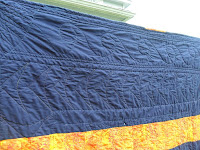 And of course, we had lots of help with taking the pictures from the local supervisors. That's Thor's orange tail going under the edge. He made sure to get plenty of cat hair on the bottom of the freshly laundered quilt to make it officially a Kat quilt! 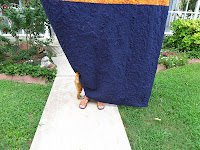