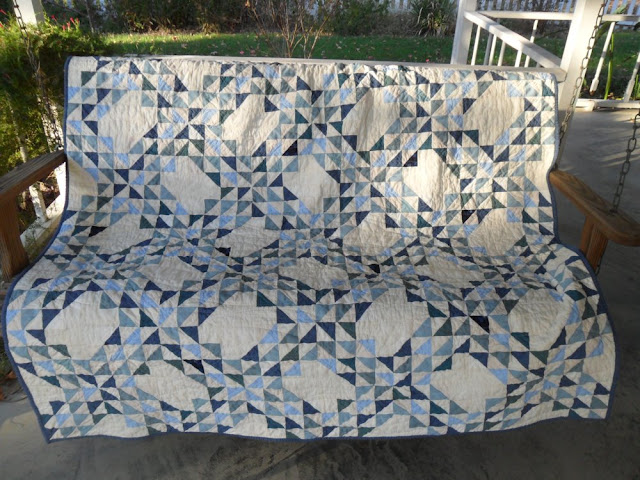 The Ocean Waves quilt, now officially named "Salt Water" is finished! The picture above is the closet I could get to a photo of the whole thing.  There's about 18" more hanging over the back of the swing. Prepare yourself for a picture heavy post.  I am pretty darn proud of this baby :)
864 2" HSTs to make one twin-size quilt; somehow the triangles look smaller now that it is quilted and washed.  Prior to shrinking in the wash this quilt measured 64"x72", a modest twin.  Despite that, it is probably the most ambitious quilt I have ever taken on. The only one that would be close would be the Carpenter's Star quilt I made last Christmas with its abundance of Y-seams.
I work at an embroidery shop, so I was able to sew up a panel for the back with this classic quote.  I set it with some variegated blue fabric and two novelty sailing fabrics.  The recipient of this quilt is a tall ship sailor, so the nautical theme is perfect for him.  I did sew up four copies of this panel since that's how many the machine can run at once. I still have 3 more in various shades of blue to play with, so who knows what projects those may turn up in later ;) 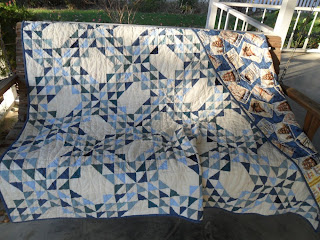 The blues for this came exclusively from scraps I have picked up over the years, mostly from remnants bins. I was actually surprised how small of a dent it made in my overflowing collection of blue fabrics.  There's a denim like fabric in here, two different shot cottons (my favorites!), a blue plaid, and a few different small prints.  The combination of them all together looks better than I ever hoped. 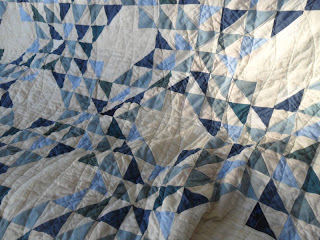 I quilted this with wavy horizontal lines.  I suppose they look like waves.  Mostly I just wanted something curvy that would break up the straight lines of the HSTs.  I quilted it pretty densely; some of the lines cross over each other and others don't.  Fortunately, it was pretty quick quilting after such a long piecing time.  It krinkled up amazingly after a wash and dry. Maybe because of all the different small pieces? I don't know, but I like it!
I love this quilt.  Plain and simple.  It would be hard to give it away if it were going to just anyone, but I'm pretty fond of this boy, too :)  This quilt is proof to me, if there ever was one, that when quilting it's not worth it to get caught up in the details.  The points of all those HSTs are "approximate" in a lot of places.  A lot of them are right on, while others are off as much as a quarter of an inch.  Because I skipped over trimming to HSTs my blocks ended up slightly large and when trimmed down to 8.5" square it was impossible to make the points meet perfectly where they came together.  If you look too closely at these pictures you'll see what I'm talking about.

But I don't care :)  This quilt looks great from 10 feet, and nobody who's going to be looking at it close up will care about the misaligned points.   It's worth every bit of the time and effort that went in to it and I love that it looks homemade and invites cuddles.  I couldn't be more happy.  Well, scratch that, when I give this to its new owner, that will be the happiest moment.