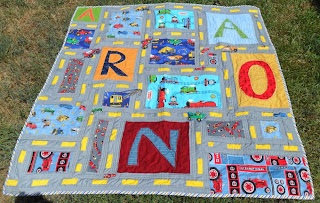 The Rambling Roads quilt is finished and heading to its new home, along with the Plume quilt, today. It measured 60 inches square before washing; I imagine it's a bit smaller now. Most of the quilting is in the "roads." In the larger blocks where I needed some quilting to stabilize them in the middle I outlined one of the vehicles or a star. 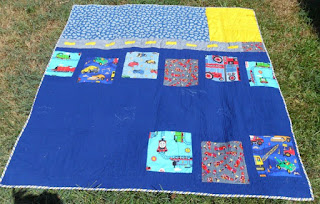 The pieced back came together really well. The darker blue is flannel to make it really super soft. I used the leftovers of the fabrics I'd used on the top and the last few inches of sashing I had left. 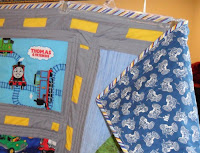 My favorite part of the back is this great tractor fabric. I just love that shade of blue, and it's so nice and soft. 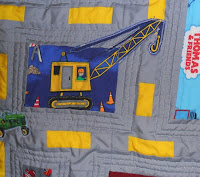 I had planned all along to applique some vehicles onto the roads, I was so relieved when I realized that this served the dual purpose of allowing me to cover some of the areas where the quilting didn't line up quite perfectly and wrinkles appeared. I first sewed them all down with a tight straightline stitch, then went around again with a zigzag to make sure everything is extra secure. I also extended this crane out of its frame, as you can see. 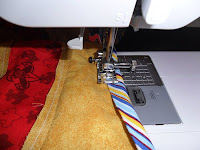 I used a stripe fabric to make bias binding for this quilt. As you can see, I've started to machine sew my bindings. Unlike most quilters, I have never minded hand sewing bindings. It doesn't take me very long, and it gives me a chance to stretch out in a recliner and watch TV while I work instead of being hunched over my machine. I initially machine sewed a few bindings that I wanted to be extra strong, and once I saw how fast it was I just couldn't resist doing it again. By the time I am to the binding stage on a quilt I am so eager to get it done and in the wash to see it all washed and dried and crinkled that I don't want to take the extra time to hand sew it. I've been really pleased with how my machine sewn bindings have come out; it's become my go to method.

Happiness is a freshly washed quilt.
Posted by Kat at 5:30 AM