For about the past year I haven't sewn many blocks for each of the CiL block drives.  I always test the blocks and make a demo block or two, and of course if I wind up a couple short of a whole quilt I make up the difference, but beyond that I usually don't make any more.  You fine folks have done such a good job of supplying blocks for the quilts! And knowing that I will soon be sewing so many of them, it keeps me from getting burned out, I think.  However, I do often find myself wanting to sew along a similar tangent. Something inspired by the blocks piling up on my desk. 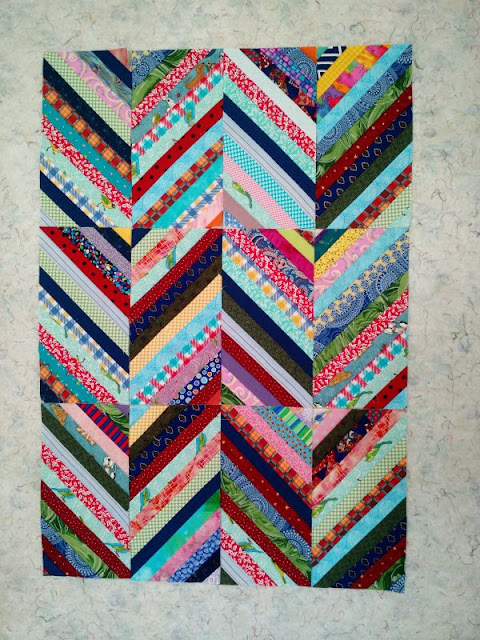 Just before October, when the CiL string block drive officially began, I trimmed up the strings in my scrap box and set to work on bright and loud string log cabins.  That quilt is about wrapped up now and yet I still have plenty of strings!  Next up? I'm trying something like a string herringbone.  Here are the first dozen blocks on the wall. What do you think?  I'm not sold yet.  With my glasses off the herringbone effect is really prominent and I like it, but in-focus the lines between the blocks catch my eye much more than the herringbone.

Linking to Oh Scrap!, Design Wall Monday, and Moving it Forward Monday.
Posted by Kat at 7:00 AM