Hello! I'm linking up to WIP Wednesday this week.  This WIP is one I have mentioned on here before, but haven't really shown.  I've been chipping away on this ticker tape for a few months.  Little by little! 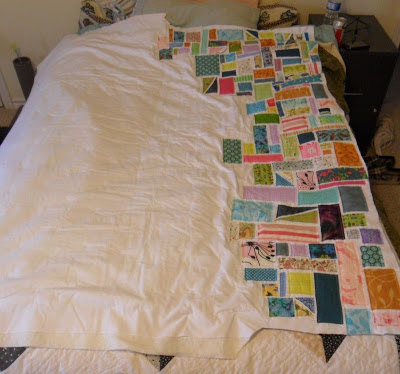 I decided to start on this because I'd always wanted to make one and I had picked up some minky on sale that I wanted to use as backing for something.  The size was determined by how much of the minky I had, and I elected to go ahead and use batting in addition to the double-sided minky backing, so it's super poofy.  Since I basted the layers upside down pins basting would have been a problem as it came time to remove them, instead I needle-and-thread basted (first time for me) and I'm just picking out the long threads as I cover up sections with fabric scraps.

I'm totally addicted to crumbs. I save anything over 3/4" inch on its smallest side.  Some of these pieces are a good bit larger than what I would really call crumbs, but I like the overall effect that the randomly sized pieces are having. 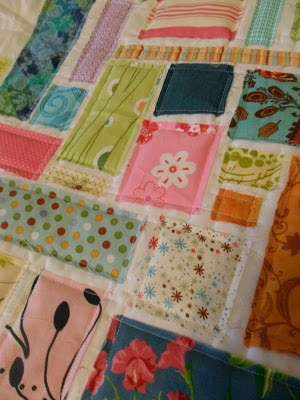 I'm straight line quilting with my walking foot, first attaching a whole bunch of pieces by sewing their two vertical ends, then going back through and sewing the other two sides down a section at a time.  It's a whole lot easier than wrestling the entire quilt in a circle under the machine for every piece.
I did a small section last night (see picture below) using FMQ to sew the square.  It went pretty well but I found that it didn't look as good from the back due to the denser quilting where I had doubled back or cut across to another piece to avoid cutting my threads and starting over.  Not sure if I will proceed using this method or the one I had been using. 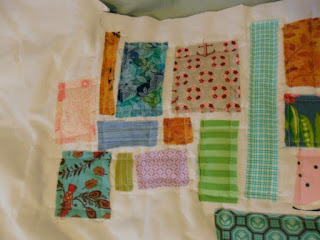 I finished up the major project I've been working on yesterday (blog post coming as soon as I get pictures) so today is a lazy day.  I plan to put in some more time on the ticker tape and watch reruns of Mythbusters.  Hope your Wednesday is great!