(Image Source)
These are the kind of easter eggs I made growing up. They're called pysanka and they're a traditional Ukranian art form. I'm an only child and my mom was mostly at home with me when I was growing up, so I got to do a lot of stuff that would have been too difficult with more kids. These eggs were one of those things. 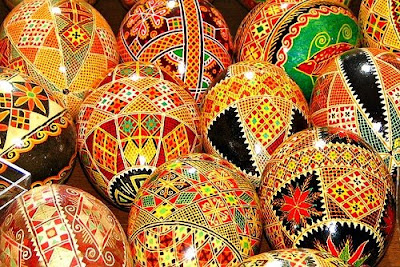 (Image Source)
You make them by carefully applying wax from a stylus, which you hold over a flame to heat. When you apply the wax it masks off the area it covers so that part won't dye any more. You move from the lightest color to the darkest and then at the end you carefully hold the egg by a flame and melt off all the wax to reveal the design.

(Image Source)
Many of the traditional motifs bear a strong resemblance to quilting designs. These are up there with middle-eastern architecture as far as inspiration goes. I never thought I'd want to embroider or hand quilt, but I'm going to JoAnn's for a hoop later today. I think that's where the design demons are leading me...
Posted by Kat at 2:10 PM

Email ThisBlogThis!Share to TwitterShare to FacebookShare to Pinterest
Labels: inspiration