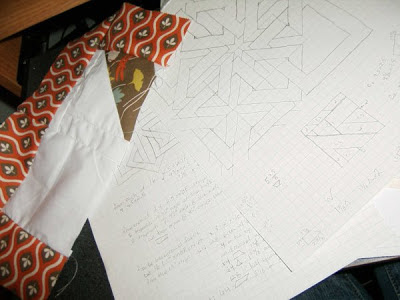 I'm absolutely working at capacity between my thesis, job, and class, unfortunately, there's no time for quilting. Believe me, it's not easy to make myself focus on the things I have to do instead!

I am still piecing on the bargello quilt. I'm thinking of naming it La Alhambra - after the famous fortress in Granada, Spain - because the curves remind me of traditional Arabic architecture. I've been researching and sketching intricate, geometric, Arabic patterns to quilt in the borders. I'm going to use something like this for the outtermost border. 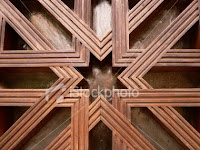 While searching for potential quilting patterns I came across this image, which gave me an idea for my next piecing project - a jelly roll quilt that will use to Arcadia roll I've been hanging on to. I worked out most of the measurements and the piecing (on paper anyway). I'm trying very hard to take notes about the exact cut requirements and piecing so that I can eventually turn this into a pattern that other people can use, rather than my usual guess and go method. Although eyeballing it works well for me, it is hard for someone else to replicate.

So, if I behave myself, there should be no new quilting progress until at least Wednesday night. Until then, the new project - tentatively titled "Couple of Squares" because of its resemblance to a squared off Irish Wedding Ring quilt - will have to stay in the state you see above. Wilson, of course, is feeling no stress. Ah, the life of a cat. He doesn't know how good he has it. 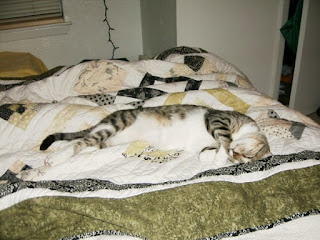