Another cat, and a new toy! 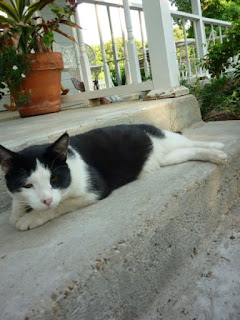 This is Turtle, the third cat I'm profiling. There were four kittens in Turtle's litter, all black and white. They were born the summer of 07 under a friend's trailer. After their mother was killed in the road the kittens started meowing pitifully from inside the ducting under the trailer. Our friend told us to come get them if we wanted them to live, so we did. One kitten died mysteriously after a day but the other three thrived. I bottle fed them (every four hours, throughout the night...) for about a week or two and then they started eating real food. One of his brothers was given away to an older lady and the other was incompletely neutered and subsequently ran away. 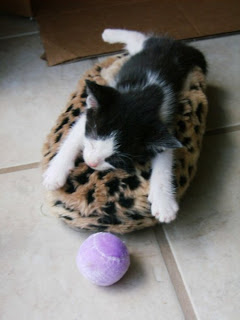 Turtle was briefly bonded to a fuzzy house shoe during his kitten-hood. He got his name because there are white gaps at the tops of his legs, base of his tail, and back of his neck, as if the "shell" of black on his back stops there. He is the largest of our cats. I've always said he's dense, because he's just so much heavier than he looks. He is a lazy, happy go lucky kinda boy. He purrs constantly, everywhere he goes, and when he purrs he squeaks, as if his motor has a squeaky wheel. He also drools when he purrs, which can be a little gross; our house is full of "special" cats. 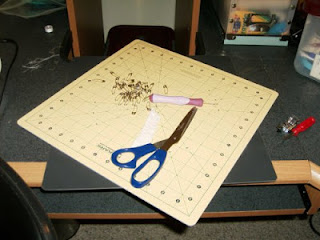 Check out this cool new cutting mat I got! It's small to fit on top of my desk and it has two parts so it spins. You don't have to turn your fabric, just spin the mat to get the perfect angle. It's pretty nice.

I other news, I've started quilting on the Irish chain quilt. I decided to go with the simple grid design, but there isn't much to see yet. Today I'm going into the city! I hope your day is great :-)
Posted by Kat at 10:46 AM