This is Thor, the fourth cat I'm profiling. He was my first bottle baby kitten, and he's still my baby to this day. There's really no other way to get a kitten to imprint on you that strongly. Thor was found by a friend of ours at about one and a half weeks old in a puddle after a rainstorm around October of 03. We weren't sure he would live, but just kept feeding him steadily and he pulled through. 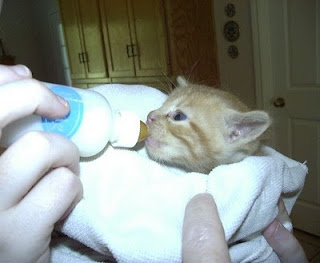 He was always a ferocious little thing, so we settled on Thor for a name. He is completely orange, even his nose is orange! He can be defensive around strange people, cats, or dogs - he can definitely hold his own - but with us he's just a big baby. (Are you seeing a theme here with our cats?) He worries if we walk too far from the house and follows about 10 feet behind making pitiful warning cries. He absolutely HATES it when you whistle. If I ever go sit down on the porch he's up in my lap immediately; and whenever I carry him he wraps his arms around my neck and nuzzles me like he used to when he was a kitten. He is also the mighty slayer of hummingbirds. He knows which flowers they prefer and will hide in the foliage until one flies up and jump and pull it down. 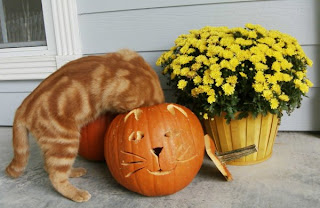 I won 3rd place in the photo contest at the local Fall festival with this shot of him checking out a pumpkin. (I did bait the pumpkin with cat food, but we don't have to tell anyone.)

Only one more cat to go! By the way, there may be a severe lack of quilting material on this blog for a little while. I'm just not in the mood lately.
Posted by Kat at 7:41 PM