Howdy! That's what they say in College Station, home to the Texas A&M Fightin' Texas Aggies!

Hehehe.  To be honest, I am not particularly rabid about my college allegiances, but I did go to A&M (Class of 2010) and I had a blast there.  So when a friend asked me to make matching Aggie quilts for her nephews naturally I agreed.

The two quilts are almost the same, excepting that the logos are mirrored color schemes and placed on opposite sides. I found 3 A&M novelty fabrics and coordinating maroon and white tone on tones.

Since these are for grown men I made them 56"x80".  I would have gone a bit wider, but I wanted to avoid piecing the fleece backing which has a ~60" WOF.

I made the two logo panels using applique/reverse applique. For more on the process see this post.  I put an extra layer of batting behind all the letters, which made them stand up nicely. 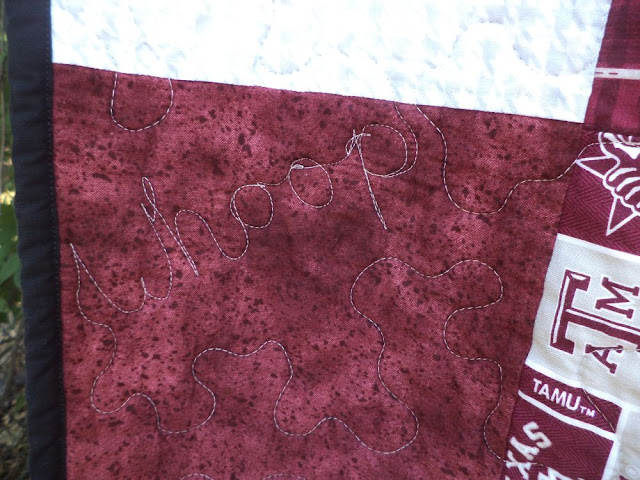 For quilting I did a stipple but mixed in words that are significant to Aggies.  First I brainstormed a list which I kept by my sewing machine and mixed in as I went.  I had to brush up on my rusty cursive!

Aggies are famous for their excessive, some might say cult-like, obsession with a large variety of traditions. I had no shortage of significant sayings, people, places, and events to draw from.

I did not try to keep the wording all going right side up; I just turned them every which way.

These quilts will not be officially gifted until Christmas, but my friend is excited about them and anxious to give them to her nephews. I really enjoyed getting back into the whole Aggie "thing" again.